The Insurance Network is a strategy and benchmarking forum for directors from the General Insurance, Lloyd’s companies and London markets. This established and exclusive network hosts a full calendar of events where senior business leaders from brokers and insurers meet to discuss the latest strategic issues in both formal and informal environments. The events range from focused breakfast briefings for a dozen directors to full day conferences for 200+

Christmas seems to start earlier and earlier so I feel entitled to start my 2018 predictions indecently early too.

Most insurers and reinsurers will be only too pleased to see the back of 2017 which has been a stinker.  A soft market, inefficient and costly distribution, a series of hurricanes all coming off the back of several years of reserve releases means many insurers and reinsurers will dip into losses, some of them substantial, for the first time in years.

All of this comes at a time when the industry is grappling with a myriad of challenges as admirable analysed by this LexusNexus in this article.

So it's both surprising and distressing to hear repeated stories that the effect of the 2017 losses is already manifesting itself in the setting of 2018 innovation budgets. Those who were just “innovation tourists” – had been taking a look out of curiosity or a sense they should be seen to be doing something - will close their innovation efforts down.  Many who were taking it seriously, but had not invested long enough for there to be measurable returns, will have their wings severely clipped.  The very brave, which will be tiny minority, will double down and see this is an opportunity to put clear blue water between them and the competition.

Those who close their innovation efforts down will say they didn’t have a choice. There simply isn’t anything in the pot for innovation and so needs must.  The irony is that most of those also didn’t invest when they had the funds  to do so because, being successful, they didn’t see the need!

A decision to do nothing on the innovation front seems to me to involve taking a bet that all, or at least most of the following dynamics apply:

While they won’t all apply, you will be very lucky as a business or in some spectacularly narrow niche to be immune from them all.

I am reminded of the famous Battle of Thermopolae in which an alliance of Greek states under the Spartans fought courageously to defend their patch against far superior Persian forces.  For three full days they fought a heroic rearguard action to block the only road to Athens.  On the third day they were finally outflanked and the remaining force of 300 brave souls refused to surrender and fought to their deaths.

It seems to me that in a world in which technology is developing so fast, the decision to fall back and defend the pass that protects your analogue heritage from the invading forces of digitisation you are bound in the end to suffer the commercial equivalent of the fate of the Greeks.

True courage in these tough times is not sacrificing yourself to a losing cause, but to double down with your investment in innovation and go for it.  With your competitors in a form of torpor, embrace and invest in innovative new technologies and the potential it offers. Use it to know more about your customers and their risks, offer them new and more dynamic products, improve the way you engage with them, cut the costs of acquiring business and do everything more productively.

Anais Nin once said that “Life shrinks or expands in proportion to one’s courage”. So does your business.

It's a tough time for the insurance industry right now, with a complex raft of issues to deal with over the coming years, from regulatory and climatic change through to adverse market factors, legacy systems and the rise of Insurtech. 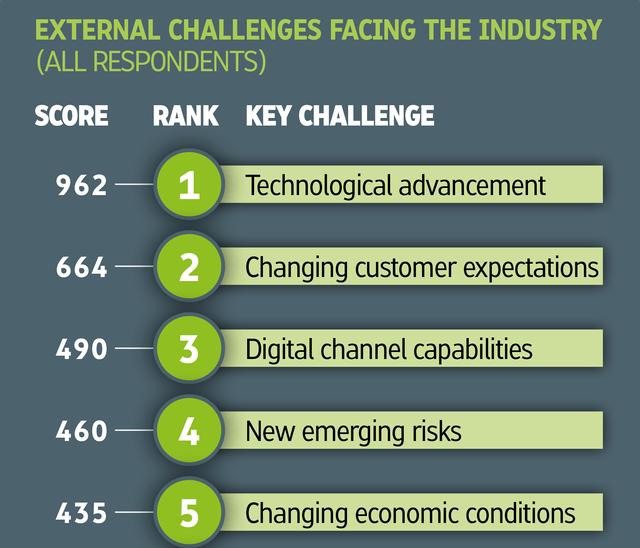 How Golf and Insurance Share the Same Problems
Robin Merttens

Ecosystems - from Buzzword to the Next Big Thing
Robin Merttens

Innovation at a snail's pace
Anonymous

Insights from - and for - the London insurance market
Jeremy Burgess

For plans and pricing, please contact our sales team at sales@passle.net

Sorry, you don't have permission to repost or create posts.

Your repost is currently a draft. Review your repost and request approval.

Sorry - this is not an option. This post already exists in the Passle you have selected.

Try reposting to another Passle.